I wrote a portion of my journal in verse today. Here is the edited version. It's almost a poem!


Here we go again.
Sue is writing at Otherlands.
Words on the screen as she types.
Wonder if it will be hate or like.
Dum, dum, dee dum.

How do I make the font smaller she wondered?
You can''t was the simple answer.
Just have to take a chance that no one can see
If they even care enough to peek.

She’s writing her 750 words in rhyme
and hears a song in her head.
Did she kill some brain cells yesterday?
Ran 13.1 miles on her birthday.
Without training, with a touch of fear.
She ran further than she planned, so walked less, oh dear.
Went out too fast, finished just right,
what a morning,
started in the dark,
finished in light.
Sounds like it could be
a metaphor for her life.
Does dark equal wrong/sad/bad
and light equal life?

People think she’s still going strong.
But she knows better, it hurts more and more
She'll keep on going.
Is she running from the past,
Maybe, that's partly true.
But how about saying
running for the future,
looking for new things to do.

Maybe I'll write a song that isn't so trite.
Or maybe I'll admit that writing this kind of stuff is actually all right.
It's creative, it's writing, and it's a way to use words.
Why should I care what anyone thinks even though I put my words out there for the world
to look at if anyone cares.
Maybe that's too strong a word, they're there if anyone looks.

It was fun while it lasted,
like so many things.
One day it was happening,
the next it wasn't.

No rhyme in that one and a little depressing.
But that's okay because it might leave readers guessing.
Was it meant to be profound
or was it based on fact?
Which is better,
the present or the past?

Oh, yeah, back on it now.
Back on the track of writing in verse.
Is it a pocketbook
or is it a purse?
Is it the present
or is it now the past,
how long should I want
these thoghts to last?
Writing alone in a room full of people.
So many latops and coffee cups, unbelievable.
Sneakers and sandles, tattoos and bare skin,
lattes and mochas,
I drink my coffee black.

An egg and tomato burrito with a thick slice of tomato on the side.
Salt, pepper, and salsa, I'm drooling inside.

That one was pretty lame, couldn't think of a good rhyme.
And I need more coffee but now there's a line.

Here is my dilemma, do I need to write again?
This was supposed to be my journal but I wrote a poem instead.

I am a writer.
At least that's what I say.
It's one of my affirmations
that I write every day.
The others I won't reveal
because they're personal to me.
I need to keep some things private
because of what they might reveal.
They say that your eyes are a window to your soul.
For me, it's words.
Intimate, private,
the essence of who I am,
even when they're funny or trite. 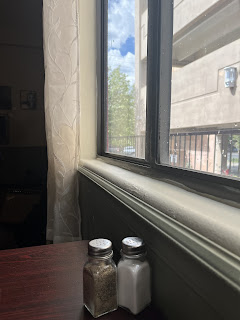