Not sure where in the book this will be, but it came out of my head tonight.


Author’s Note
Feeling morbid.
Feeling alive.
Feeling out of control.
I feel like my brain has been on speed
Thoughts trigger thoughts
Which trigger more thoughts.
They come in a rush.
Too fast to get them all down.
My fingers can’t keep up with my head.
Thoughts keep me from going to bed,
Wake me during the night,
Follow me during the day.
Thoughts exploding in my head
On the pad of paper next to my bed
On my phone
On my laptop.
So many thoughts
It is almost overwhelming.
I’m getting lost
And yet I feel found.
Thoughts exploding
Surround me
Like a wildfire.
Which at some point will burn to an end.
Amazing grace, how sweet the sound
That saved an unhappy person like me.
I once was lost, and now I’m found.
Was blind and now I see.
I almost said fool instead of wretch.
But then I looked up wretch and saw that it
Accurately describes me.
Not always, but sometimes.
“an unfortunate or unhappy person”
I don’t like the other definition,
Which is why I refuse to sing that word,
“a despicable or contemptible person”
Why would anyone call himself that?
I may be a foold sometimes.
I may be unhappy,
I may be writing stories about dead people,
And that may make me unfortunate
But it does not make be despicable.
I would rather that no one feels contempt towards me,
Although I am sure that some kids do.
I’m a little different.
And I know that sets me up.
It’s easier to bully someone who scares you
Than someone you truly understand.
There’s a saying my dad uses,
“Ignorance breeds contempt.”
So, yes, maybe kids think of me as wretched,
But I don’t give a fuck.
I am who I am.
And if someone thinks that makes me descpicable or contemtable,
That is their issue,
Not mine.
As the other saying goes,
“Sticks and stones may break my bones,
But names will never hurt me.”
Which isn’t entirely true.
The names hurt,
But knowing that it isn’t my fault
That they choose to call me names
Or treat me like crap,
Knowing it is their action, not mine,
That helps with the hurt and
Lessens the pain.
Not pain-free,
Not wretched.
But Amazing grace os a sweet sound.
And I was once blind to how life works
But now I see.
I am in control of my destiny.
I’m the one creating a book of characters
No one has ever met.
That is power.
That is satisfying.
'Twas grace that taught my heart to fear,
And grace my fears relieved;
How precious did that grace appear,
The hour I first believed.
Ah, grace.
What do I believe in?
I’m still figuring it out.
But I do know
That I believe in something
And there’s a good chance that
I’ll never totally figure it out.
Such is the spirit that lives within me.
I believe in my soul.
I believe in me.
Whether anyone else does or not.
on November 15, 2017 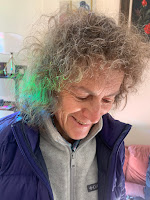