Short story #2 for NaNoWriMo. I’m not sure if this one is done or if I’ll add to it.

Walter the Wallaby was getting grumpy. Okay, maybe he wasn’t getting grumpy. He’d been grumpy for a while. He didn’t like his kangaroo neighbors. He didn’t like jumping and running in the same place every day. He kept thinking there must be something more to life. He kept feeling like there should be more to his life. Like there should be more wallabies for him to meet. But there weren’t. It was him, Mac, Becky, and Addie. And those snobby kangaroos, some humans who worked at the zoo and thought they understood Walter and his moods, and those totally annoying humans who came to visit during the day. He could hear them running, jumping, screaming, laughing, crying, banging on the fence, and generally be loud and, well, annoying. Why couldn’t they visit quietly? Why did they have to visit at all? Why couldn’t they just let him live in peace?

He heard the humans who brought the food talking, they might be getting two more wallabies. Neither Becky nor Addie was pregnant so they weren’t going have a joey. Where were these wallabies coming from? Would they still need him? Maybe they could set him free or send him to a zoo that had a bigger area to jump in. Or more wallabies. Or less annoying visitors. Maybe even better weather. He thought he would like some place a little warmer, Sometimes it got so cold the building he slept in was warmed by a machine. It was noisy. The hot air would blow down on him and make his long snout itch.

But Walter knew he wasn’t going anywhere. He was too old. And too grumpy. The zoo was probably getting a couple of joeys. Walter knew what that meant. If the zoo got joeys now, when he got really old the joeys would be old enough to provide entertainment the way he used to. Before he started getting old and cynical. Before he started getting bored and disappointed. Before he started having dreams of a life before the zoo and realized the dreams weren’t totally made up, parts of them were real. He really did have a life before this zoo. A mother and father. Maybe even a sister or brother. Mac, Becky, and Addie were nice enough, but he knew they were friends not relatives. He couldn’t remember if he had lived in another zoo or out in the open. Free. All he remembered was more space, more wallabies, and a feeling of home. Family, not friends. Most importantly, he remembered being called a name that wasn’t Walter. He couldn’t remember the name exactly but it didn’t sound like Walter. It’s might have been sun which seemed like a funny name for a wallaby. Or maybe sometimes he was called sun and sometimes he was called something else. What he really wanted to be called was Boomer or Jack. He remembered hearing those names. And he thought his mom was Jill. He still heard those names used, but this zoo didn’t have a wallaby named Jack or Jill or Boomer, so maybe he was imagining it. As he thought about it, he felt something in his heart or maybe it was in his snout. Thinking about it made him feel tired. And the more he thought about it the grumpier he got.

Walter the Wallaby was grumpy and old. And jumpy. No matter how grumpy he got, he still chomped down on leafy plants and hopped around the pen. And tried to ignore the voices inside his head as well as the ones outside the pen. And always he listened for the chirp he remembered and would shout out his chirp in the hope it would be returned. 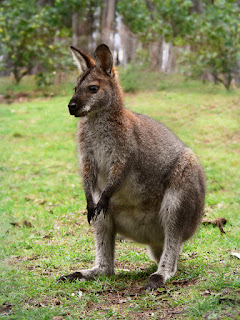